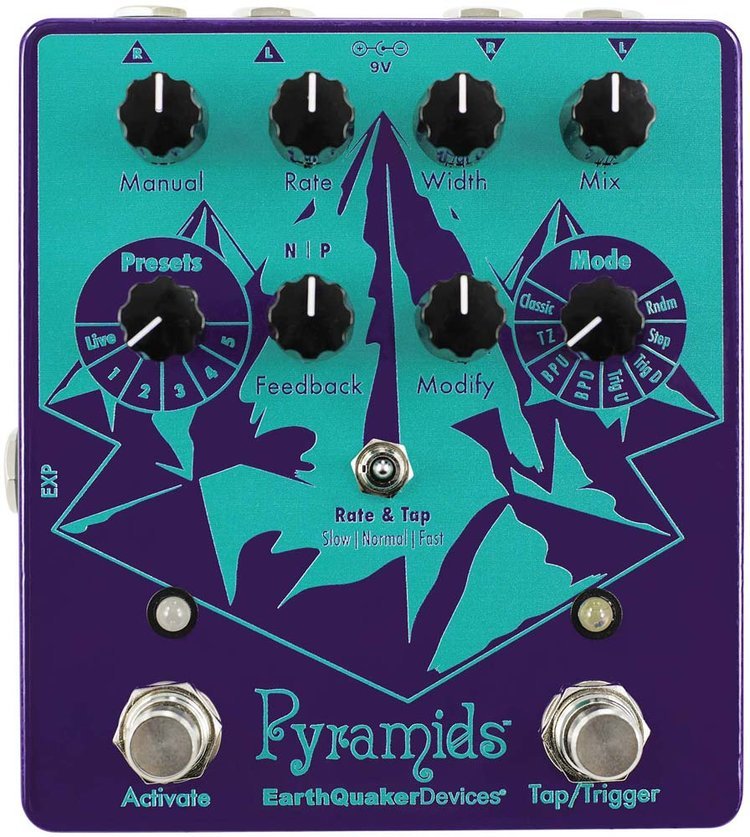 For standard latching operation, tap the footswitch once to activate the effect and then tap again to bypass.

For momentary operation, hold the footswitch down for as long as you’d like to use the effect. Once you release the switch the effect will be bypassed.

Since the switching is relay based, it requires power to pass signal.

To use with multiple output transformer-balanced isolated pedal-specific power supplies, Pyramids’ may be powered from two outlets combined using a current-doubling cable. DO NOT USE A VOLTAGE-DOUBLING CABLE BECAUSE THAT WILL SEND 18V TO PYRAMIDS AND FRY IT LIKE AN OVEREASY EGG AT A GREAZY SPOON DINER.

PCBs populated by a combination of artificial and human intelligence in the Akron, Ohio of America.

Each and every Pyramids is completely assembled, wired, and tested by total human beans in the Great Sphinx of Akron, Ohio, which, coincidentally, looks exactly like the cover of Iron Maiden’s Powerslave.

Pyramids is a Stereo Flanging Device with five presets, eight flanger modes, tap tempo, tap subdivision, a multifunction Modify control, positive and negative Feedback, and a variable Mix control, which is something you don’t see on a flanger every day.