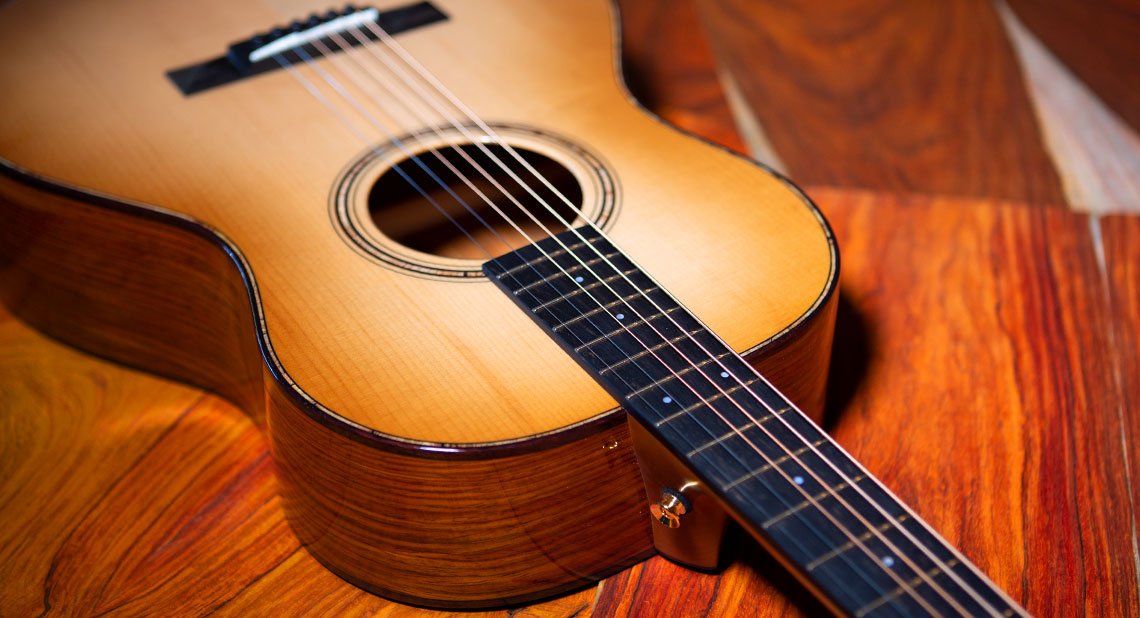 Adirondack delivers volume and clarity without distortion even with heavy picking. Adirondack is relatively heavy, with a high velocity of sound, and has the highest stiffness of all top woods across and along the grain.


Cocobolo grows from southwestern Mexico through western Central America – creating one of the world’s most colorful woods. Reaching as much as 80 feet in height and three feet in diameter it is known for its dynamic patterns of browns, oranges and yellows. As a results of its picturesque grain patters and water resisting oil content, cocobolo has been over harvested – resulting in it being listed in Appendix II of CITES. CITES is a coalition of over 180 countries and the European Union that all agree to support the protection of threatened and endangered species of plants and animals.

Bedell Guitars works closely with all of our tonewood suppliers to not only comply with all country laws and regulations, but to insure we are using no clear-cut trees – ever, and that we disturb the forest neighborhood as little as possible. Our cocobolo grew in the vicinity of Rivas, Nicaragua close to the Pacific coast. It was thoughtfully and legally harvested through Diamond Teak, an environmentally driven forest sustainability company located in the mountains of Costa Rica. It was milled by Cook Woods in Klamath Falls, Oregon. As part of its commitment to reforestation Diamond Teak has planted over 50,000 cocobolo seedlings over the lasts three decades.

Cocobolo is part of the same dalbergia family as Brazilian and other rosewoods, however it is unique in its brown/orange/yellow color and is the most dense of the dalbergia woods. In fact, cocobolo has a specific gravity of 1.1 which means it sinks in water. Several guitar companies have built instruments with cocobolo back and sides due to its stunning beauty, but they are customarily heavy and not responsive. This is due to a lack of understanding in how to turn cocobolo into a true and magnificent music wood. Instead of sanding cocobolo tonewood to the same dimension as other species, its density must be taken into consideration. For example, cocobolo has twice the density as Honduran mahogany. Through Bedell Guitars Hand Tuning technology we have learned to sand our cocobolo backs to a targeted weight that will yield the frequency response to maximize the music potential of this brilliant species. The instruments we are crafting with the marriage of Hand Tuning and the density of cocobolo result in extraordinary sound, rivaling the long heralded brilliance of Brazilian rosewood.

Bedell Guitars invented a new shape for parlor guitars. The lower bout is both wider and longer than traditional parlors giving the instrument more air volume and therefore more sound. As a 12-fret to the body design, the bridge is positioned right in the center of the lower bout enhancing the modal dynamics to deliver more efficient and pronounce sound. For a small instrument, our Bedell Revolution Parlor produces a big sound.

The cocobolo back has been sanded to a thinness that really brings the parlor to life. We do not build our guitars to a predetermined tonewood dimension, but rather sand them to a weight that responds to a target frequency, several half steps higher than the Adirondack spruce soundboard. We then hand carve the bracing and tone bars to insure the entire guitar top is tuned to deliver maximum sound efficiency.

The comfort of the smaller body make the Revolution Parlor a dream to play; the beauty of the design makes it a joy to present. It is not an exaggeration to call this guitar the Angel of all Parlors!